You are here: Home / Projects / Controlling pest pear in Laikipia

Pastoralists in northern Kenya are heavily dependent on livestock. Their lives are being devastated by the non-native cactus Opuntia stricta. This weed has invaded the last good grazing land and when livestock and wildlife eat its fruits the spines can cause infection and death. Chemical and mechanical control methods are expensive and impractical, so we are helping to introduce a new sustainable method: a sap-sucking insect that feeds solely on the cactus. 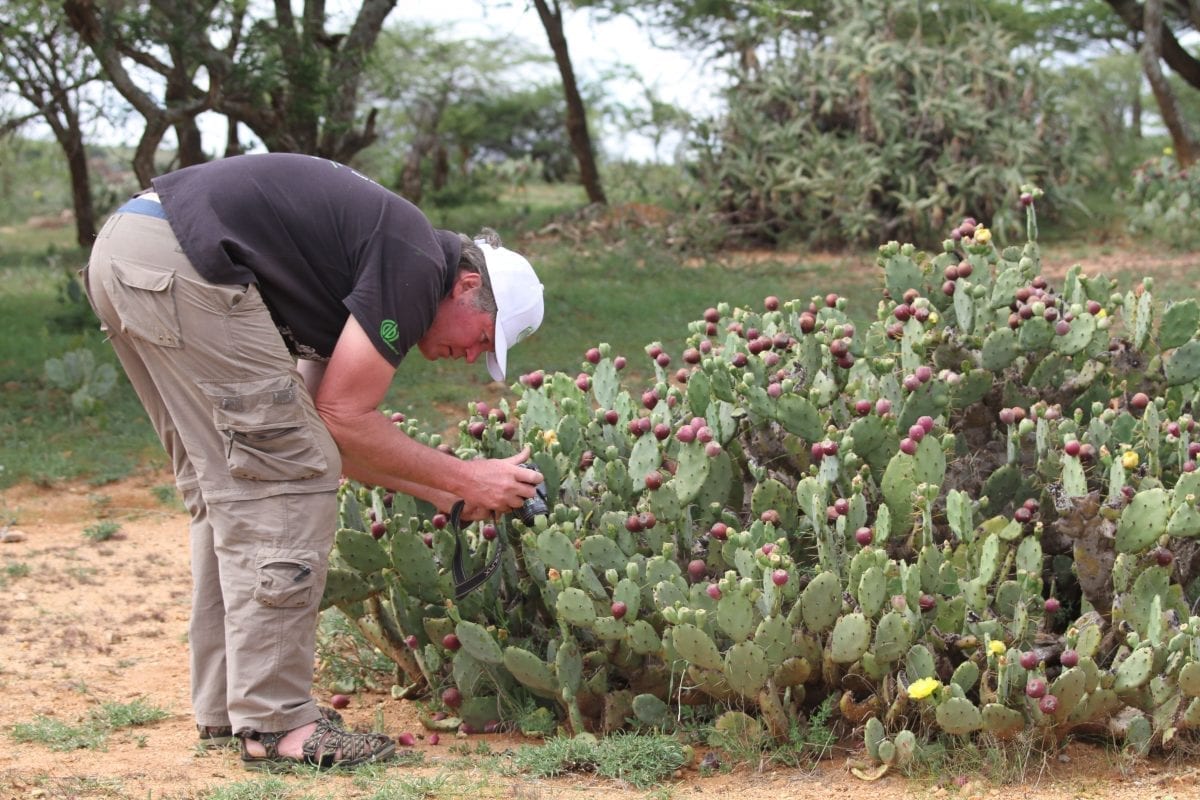 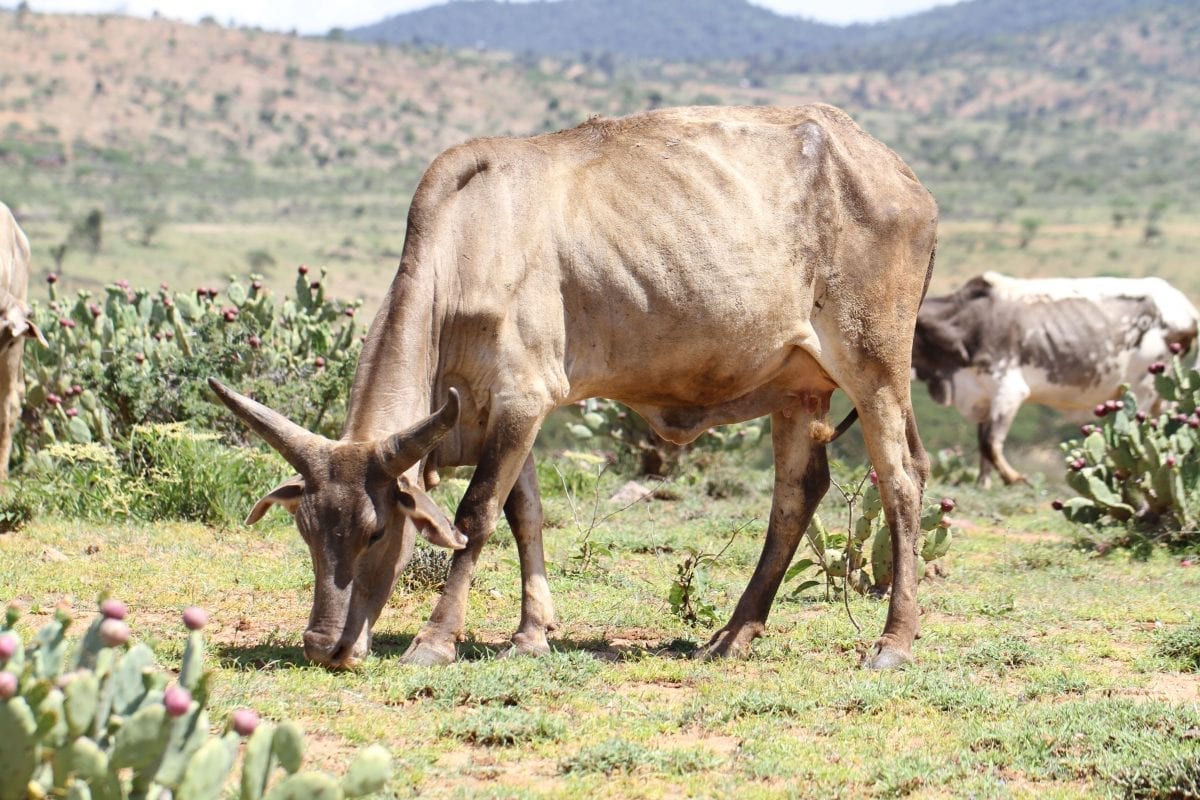 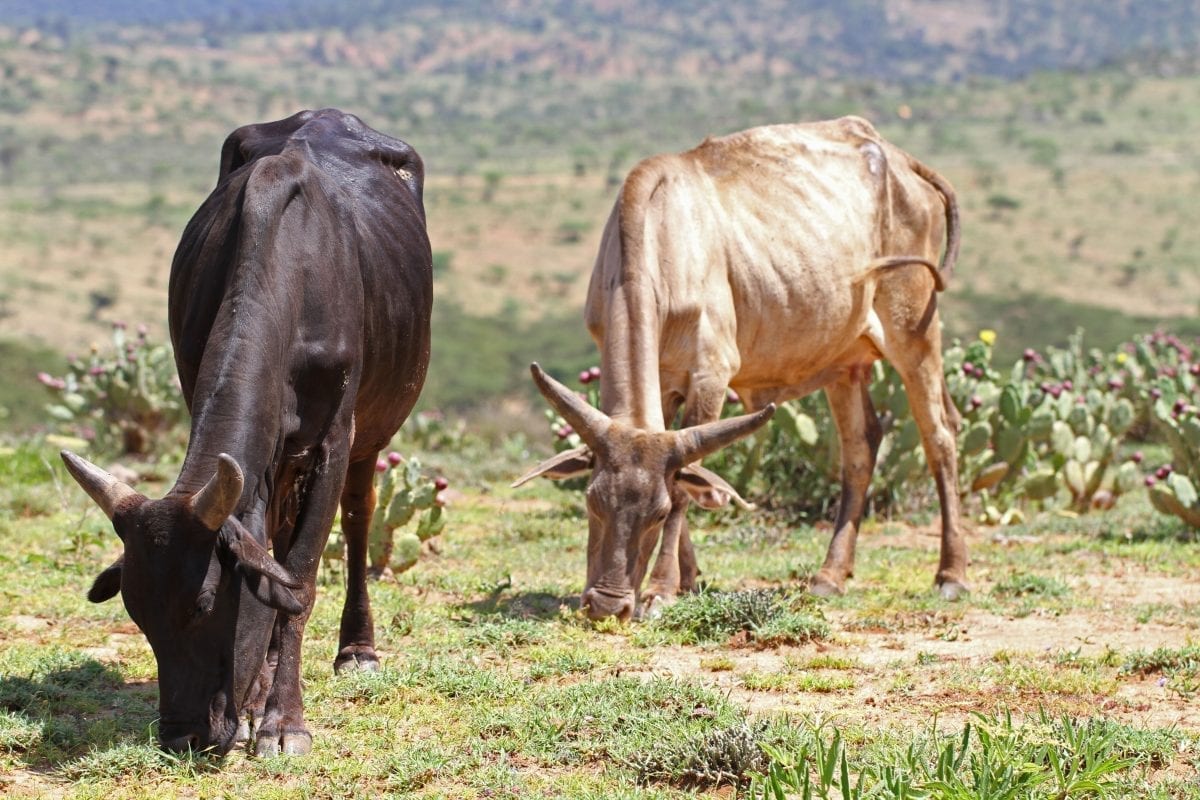 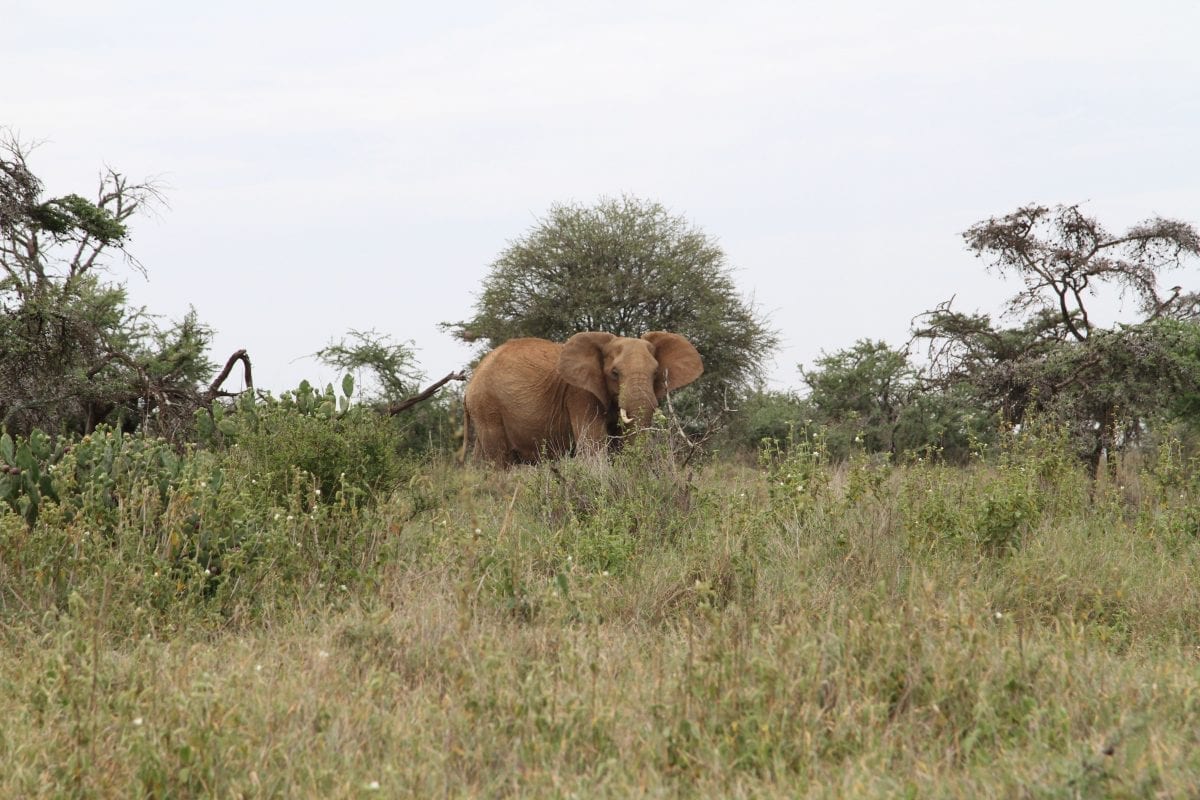 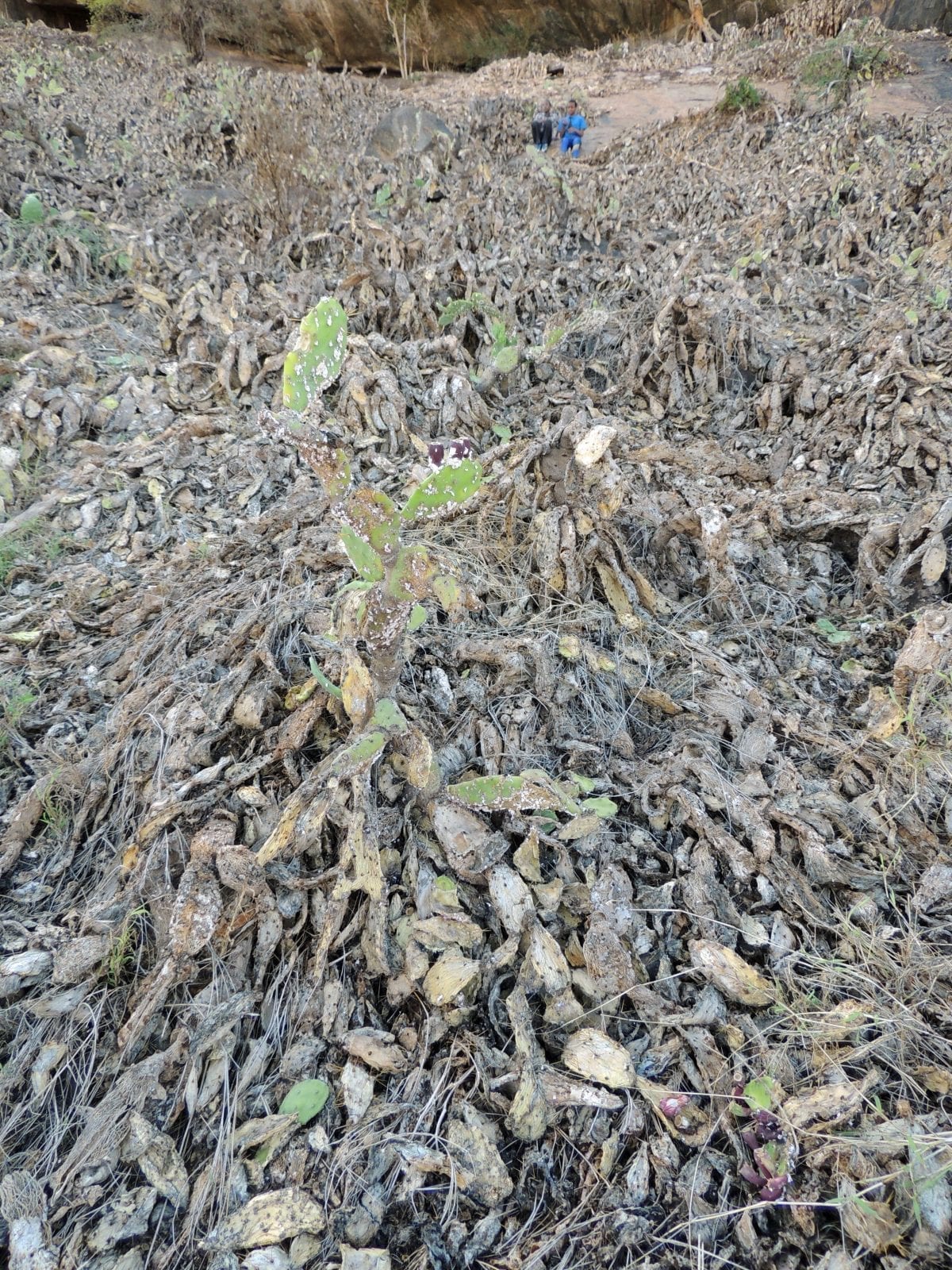 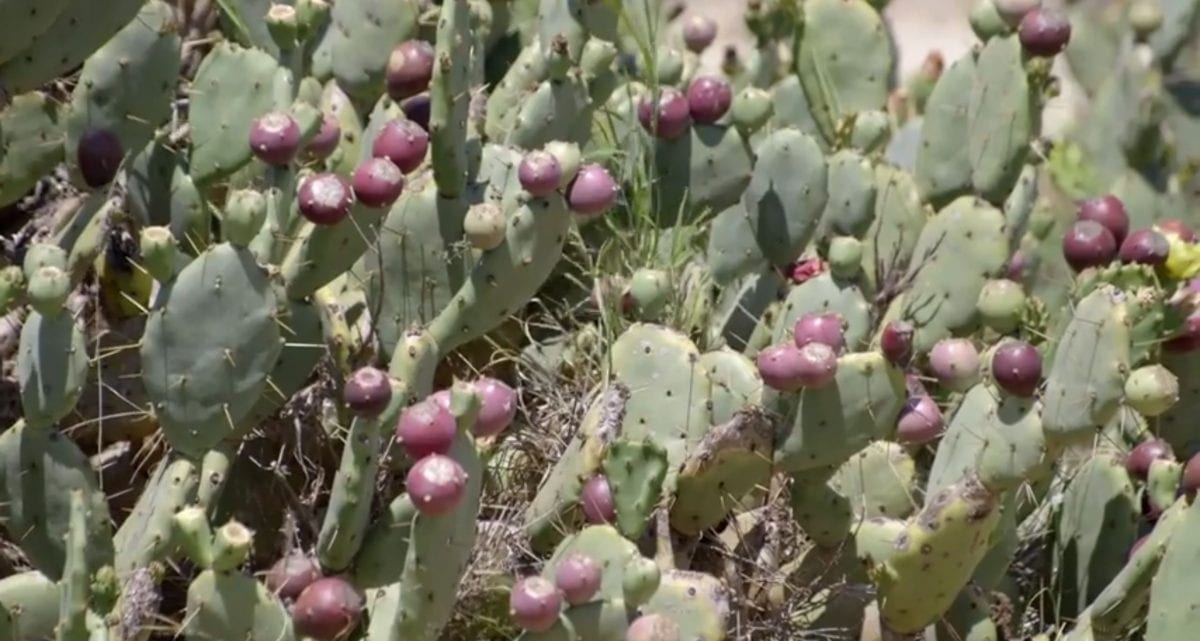 Communities in northern Kenya are heavily dependent on livestock. In this semi-arid region, pastoralists rely on cattle, goats and sheep as a source of income and struggle with frequent drought and poor pasture. A non-native cactus, Opuntia stricta, has invaded the limited amount of good grazing land left. When livestock eat the cactus fruits, the small spines, called glochids, lodge in their mouths, throats, stomachs and intestines often causing infection and death. The large spines on the modified stems, called cladodes, often blind livestock by piercing their eyes as they try to access forage. Loss of livestock leaves pastoralists in Laikipia without income.

The cactus is affecting a number of conservancies in Laikipia, including Ol Jogi Ranch which is home to many iconic animals, including black and white rhinos, elephants, big cats, wild dogs, Grevy’s zebra and antelopes. Rangers believe young elephants are dying as a result of feeding on the cactus fruit. Opuntia stricta also displaces native plant species and prevents rehabilitation of degraded land. Like their neighbouring pastoralist communities, Ol Jogi has lost good grazing land for resident wildlife to this invasive cactus.

Until recently, only two means of controlling the cactus were available for pastoralists, farmers and conservationists in Laikipia: chemical control by using herbicides and/ or mechanical control by cutting down individual cactus plants. Both of these methods posed challenges in terms of expense, environmental impact and practicality. However, another way exists, CABI is partnering with Ol Jogi Ranch to introduce a sap-sucking insect to the region.

This sap-sucking bug (Dactylopius opuntiae or ‘dudu’ in Swahili) feeds solely on Opuntia stricta and is unable to feed or develop on any other cactus or native plant species in Africa. The insect has successfully controlled the same cactus species in Kruger National Park, South Africa.

With approval from the Kenya Plant Health Inspectorate Services (KEPHIS) and funding from Ol Jogi Ranch and CABI, the insects were imported from ARC-PPRI in South Africa and placed in quarantine for trials at the Kenya Agricultural Research Institute (now KALRO). The trials confirmed the bug posed no threat to native plant or introduced crop species in Kenya. The National Environment Management Authority (NEMA) gave permission to undertake further field trials on Ol Jogi land, which again confirmed that the insect posed no threat to any other flora. Based on this evidence, NEMA gave permission to release the insect more widely in Laikipia.

Ol Jogi is now partnering with neighbouring communities to release the cochineal into nearby ranches also affected by the cactus, including the community-owned wildlife conservancy of Naibunga. This little ‘dudu’ has huge potential to control the invasive cactus which if not managed, could mean that more than 70% of grazing land is lost. This biocontrol could therefore save costs and restore land to local wildlife and livelihoods to Laikipias farmers. 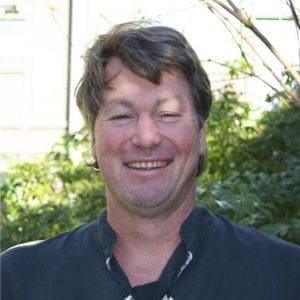