12 June 2014  Brazils World Cup mascot, Fuleco the three-banded armadillo, is under threat. Its habitat in Caatinga, Northeast Brazil, is being smothered by rubbervine, an invasive weed. Already thought to be extinct until its rediscovery in the 1990s, the armadillo has suffered a substantial decline in numbers over the past decade. Causes include loss of habitat.

Known as devils claw, rubbervine weed (Cryptostegia madagascariensis) was introduced to Brazil from its native Madagascar as an attractive ornamental plant, but has since gone on to become a highly invasive weed in Brazils semi-arid northeast. The vine, capable of smothering vast areas of forest and forming an impenetrable mass, is threatening the home of this rare armadillo.

The weed is killing native trees and preventing the movement of animals and humans, and because it produces lots of seeds and toxic sap, standard control methods are extremely difficult, as well as hazardous.

Aside from endangering the habitat of Brazils World Cup mascot, rubbervine is jeopardizing the Carnauba palm, or tree of life. Some areas of palm, whose wax has been sustainably harvested by local communities for centuries and kickstarted the fortunes of the S.C. Johnson Corporation, are now being abandoned due to the toxic invasive weed.

As part of SC Johnson’s efforts to protect natural resources for future generations, the company today announced it has provided a grant of 1.2 million Brazilian reals ($370,000) to CABI. 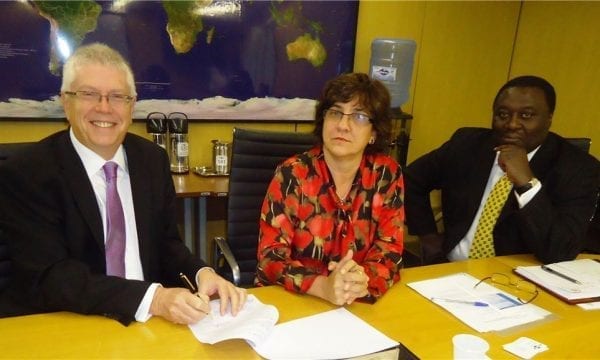