CABI experts have updated authorities, as well as researchers from several universities, public and private institutions, organizations dedicated to studying invasive species in Ecuador, on its efforts to help find an effective biological control for the invasive blackberry (Rubus niveus) on the Galapagos Islands.

Dr Marion Seier and Dr Harry Evans and told the second participatory workshop – held by project partners the Charles Darwin Foundation (CDF) and the Galapagos National Park Directorate (GNPD) – that CABI in partnership with CDF, GNPD and the Yunnan Academy of Forestry and Grassland (YAFG) is stepping up research on a range of rust pathogens which could be used to control invasive blackberry.

Dr Rakan Zahawi, executive director of the CDF, told the workshop, “The most problematic plant species on the islands is blackberry. Introduced in 1968, blackberry is now seriously degrading the Scalesia forest in Galapagos.”

Invasive blackberry has invaded most of the wetter parts of the islands and is estimated to cover more than 30,000 hectares (around 21,500 football pitches).

Dense spiny thickets of blackberry can grow up to 3 metres tall, affecting farmland and also preventing the unique native forest dominated by the endemic daisy tree (species from the genus Scalesia) from regenerating.

At present control is a mixture of manual labour and herbicide application, but its fast growth and large seedbank make these methods expensive, labour intensive and not very successful. This has led to heavy and regular use of herbicides or land abandonment.

Danny Rueda, director of the GNPD, said, “The biggest challenge is to find a solution that includes a biological control agent for this invasive species.”

CABI, since 2015, has been searching for potential biocontrol agents from the Asian native range of the blackberry (India to China) to introduce on the Galapagos Islands. Their work will also define more precisely the exact origin of the individual species introduced to Galapagos using genetic markers.

If a suitable agent is found, additional funding with allow for a rigorous 3-5-year testing process to be undertaken. This will ensure that the biocontrol agent for blackberry poses no risk to native, non-target species, as well as related cultivated species like the commercial Andean raspberry on mainland Ecuador, and ornamental roses grown for export.

Dr Marion Seier updates the workshop on progress made investigating a range of rust pathogens that might be effective in controlling invasive blackberry on the Galapagos Islands (Credit: Juan Manuel García, CDF).

Dr Seier said, “The genetic variety of the blackberry Rubus niveus present in Galapagos originates from southern China and we are increasing efforts in this particular area to search for a rust fungus specific to the invasive Galapagos blackberry.”

She added that at present control is a mixture of manual labour and herbicide application, but its fast growth and large seedbank make these methods expensive, labour intensive and not very successful. This has led to heavy and regular use of herbicides or land abandonment. The workshop heard that this method of control is not sustainable in the long term and that a safer and more environmentally friendly biological control agent must be found to tackle invasive blackberry.

On the first day of the workshop, presentations showed the work done over the last eight years about the damage this invasive species causes to endemic plants, such as Scalesia, and animals, such as the little vermillion flycatcher (Pyrocephalus nanus).

“The Scalesia forest on Santa Cruz has been reduced to only 3% of its original distribution and every year we are losing about 5% of the current distribution to the blackberry,” said CDF ecologist Dr Heinke Jäger. 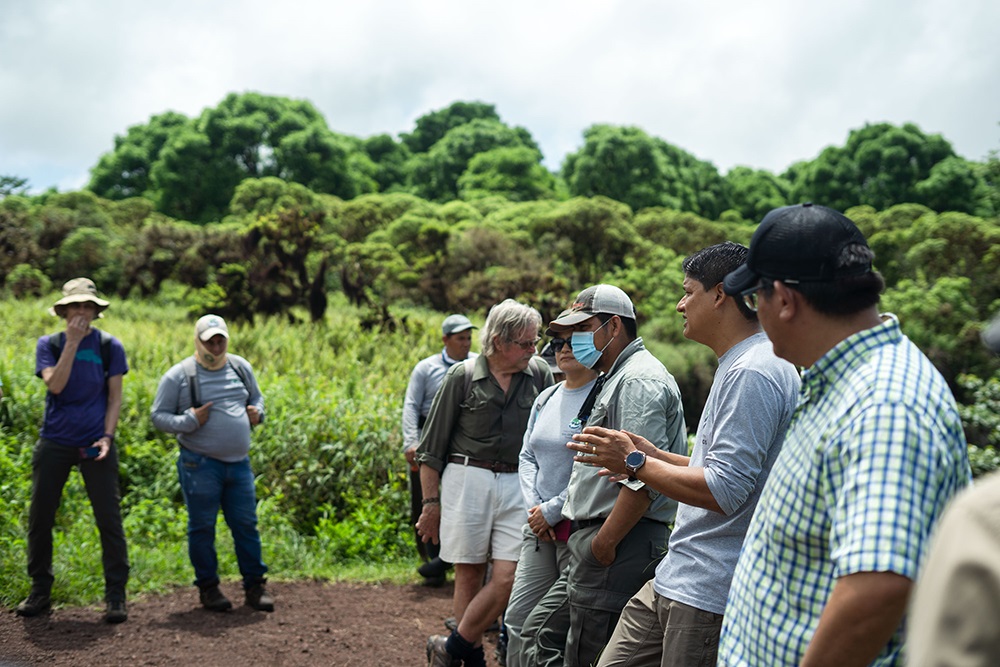 On the second day of the workshop, participants went on a field trip to ‘Los Gemelos,’ to witness the damage that invasive blackberry is causing to the Scalesia forest is clearly visible, as well as the hard work the GNPD is carrying out there to protect the endemic Scalesia pedunculata.

On the last day of the workshop, presentations explained the protocols and regulations in place for the importation of a biological control agent to Ecuador and Galapagos. There were also working groups to discuss alliances between institutions, communication with the community and monitoring of the project’s progress, which are fundamental to direct the next steps of the project.

Mauricio Zambrano, an official from the Agency for Regulation and Control of Plant and Animal Health (AGROCALIDAD), who travelled from Quito to Galapagos to attend the event, said, “These workshops allow public and private institutions to see the problems caused by the introduction of species that do not belong in this ecosystem. The blackberry really is a big problem, so I congratulate the CDF and GNPD who are constantly seeking funds to control this pest.”

The workshop was held with the support of the Fund for the Control of Invasive Species in Galapagos (FEIG) and the Fund for Sustainable Environmental Investment (FIAS), and also the Ministry of Environment, Water and Ecological Transition (MAATE) and the GNPD.

Main image: CABI experts join the delegates at the second ‘Participatory workshop on the development of an agent for the biological control of the invasive blackberry (Rubus niveus) on the Galapagos Islands’ (Credit: Juan Manuel García, CDF).

The Charles Darwin Foundation for the Galapagos Islands published a press release in relation to this story which can be read in full here.

The Galapagos National Park Directorate (GNPD) and the Charles Darwin Foundation (CDF) are partnering with CABI to help protect the iconic Galapagos Islands from an invasive blackberry.

Find out more from the project page ‘Controlling the invasive blackberry on the Galápagos Islands.’

The Galapagos National Park Directorate (GNPD) is partnering with CABI and the Charles Darwin Foundation (CDF) to help protect the iconic Galapagos Islands from an invasive blackberry (Rubus niveus). This non-native plant was introduced in 1968 and is causing serious problems for local biodiversity and agriculture. It is now considered one of the worst weeds affecting the islands.