Non-native invasive species, such as insect pests and Needs, have a huge impact on livelihoods, food production and biodiversity around the world. Classical biological control (CBC) by the introduction of exotic biological control agents from the area of origin of an introduced pest provides a sustainable and cost-effective control method that minimises the use of pesticides. It has been practised widely for more than 100 years, with many successes.

Developed countries have used this tool far more than developing countries, which are often dependent on donor assistance and expert help to implement such projects. CABI supports national programmes to implement CBC programmes, and has been involved in some very successful programmes. There is a shortage of comprehensive impact studies, but we outline three examples from programmes where CABI has played a role, and tabulate results from a further five selected studies. Increased donor support to develop and implement CBC in support of farmer livelihoods and food security is needed — cost-benefit analyses have clearly shown that the returns on donor investments in CBC programmes are significant. 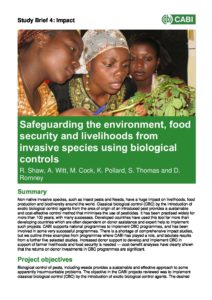