In Vanuatu, a decade of low world cocoa prices has led to many smallholder farmers neglecting their cocoa trees, resulting in infestation by black pod disease and rats, with catastrophic yield losses. Attempts by the government and other development organisations to encourage improved cocoa management, undertaken since the early 2000s, have had little impact, with few farmers ready to dedicate additional time to cocoa production. As a result, despite such programmes, cocoa yields have continued to fall, even while prices for cocoa on world markets have begun to rise.

In 2011, an ACIAR-funded project, involving the Secretariat of the Pacific Community (SPC), CABI and the Commonwealth Scientific and Industrial Research Organisation (CSIRO), investigated how labour constraints impacted on cocoa management. In a survey conducted by SPC, the most common reason preventing farmers from adopting recommended practices such as pruning and weeding was lack of time, due to competition from copra production (another cash crop), food production and village activities. Based on this information, an Integrated Pest and Disease Management (IPDM) programme was initiated by CABI and CSIRO to demonstrate that increased yields could be achieved by using straightforward and practical control methods.

One hundred and twenty farmers in 10 cocoa cooperatives were invited to participate in the project. Initially, a number of on-farm training sessions were carried out and farmers were taught about IPDM, which included the biology of black pod disease, rat behaviour and pruning, in order to increase their understanding of the pests and their management. Subsequently, a 12-month trial to test the practicality and efficacy of three different levels of IPDM was initiated; 72 of the original 120 farmers participated. These management techniques focused on pruning, removal of infected cocoa pods, rat control and plot sanitation.

In 2014, the project team returned to some of the villages where training had taken place and interviewed 18 farmers (17 had received either direct or indirect training; one had had no training). Of these, all but two had adopted either high level or medium level management within their cocoa plantations, and 14 had passed on their training to others in the community. Increases in cocoa yield varied: several farmers reported increases of 40-55%; six other farmers reported much bigger gains, ranging between 165% and 800%. Importantly, discussions indicated that the trained farmers were allocating more time to cocoa than previously and were regarding the crop as a valuable source of income, worthy of greater labour investment. 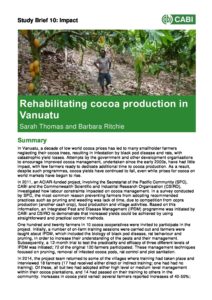