Agriculture accounts for around one-third of Bangladesh’s gross domestic product and more than 30% of money earned from exporting to other countries. Nearly two-thirds of the country’s population works in agriculture, and around 80% depend on it for their livelihoods. The country’s major crop is rice, planted on 75% of farmland, with the remainder including high-value vegetables, fruits and spices. Pests destroy between 10% and 25% of harvests, despite the estimated 49,000 tonnes of pesticides used by farmers every year.

The Plantwise programme, led by CABI, aims to contribute to increased food security, alleviated poverty and improved livelihoods by enabling men and women farmers around the world to lose less, produce more and improve the quality of their crops. In Bangladesh, a 2017 study has revealed that farmers who regularly attend plant clinics are more likely than non-users to be able to identify and manage crop problems, as well as increase crop yields and profitability. With increased knowledge of improved farm practices, plant clinic users are also having to rely less on chemical fertilisers to manage pests and diseases. 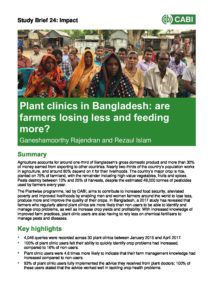