You are here: Home / CABI Publications / Promoting IPM on a large scale in DPR Korea

Promoting IPM on a large scale in DPR Korea

Agriculture is crucial for the Democratic People’s Republic of Korea (DPRK), involving approximately 50% of the economically active population and contributing an estimated 25% to the gross national product. However, agricultural production has remained low due to soil degradation and pest damage in cabbage and maize (particularly due to lepidopteron pests), amongst other reasons. To help improve productivity and address food security issues, CABI has been working in DPRK since 2002 to introduce integrated pest management (IPM).
This is a sustainable approach combining cultural, biological and chemical control methods to provide stable yields and long-term reduction in pesticide use. By integrating IPM into agricultural production, as well as into extension and education in DPRK, higher yields for staple crops, such as maize and cabbage, have been achieved and communities protected from the short-and long-term effects of harmful chemical pesticides.
Sustained support and facilitation from CABI to national research institutions has also helped to strengthen capacity, so that further IPM can be developed across the country. Whilst the initiative initially focused on technical interventions, including the introduction of biocontrol – using Bacillusthuringiensis (Bt) biopesticides and Trichogrammawasps – CABI’s approach changed over time. In order to scale up successful interventions in the field, CABI recognised that it needed to develop a broader approach. This involved training with:
•technicians – to produce the biocontrol agent;
•extension workers – to introduce participatory approaches for the training of farmers in IPM practices;
•farmers – to apply the biocontrol method and other IPM tools.
Raising awareness among Ministry of Agriculture(MoA) officials was also an important component, to ensure their support of the IPM approach and to have them coordinate the farmer training by extension officers. Latterly, CABI’s involvement shifted to a focus on institutional change, networking between stakeholder organisations, and policy level support for implementation of sustainable agriculture, including IPM.
The achievements in DPRK have therefore not been the result of one CABI project or set of activities. Component has been key, with the introduction of local biocontrol facilities and scaling up of effective IPM solutions to larger areas. However, the achievements overall are due to the move over time from a ‘one problem–one solution’ pest specific approach towards integrated solutions focused on institutional change. This has involved building on lessons learned and delivering the solutions through an innovation systems (multi-stakeholder) approach. 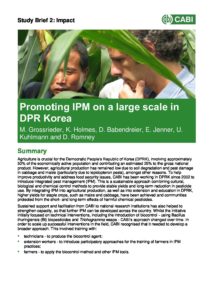 Promoting IPM on a large scale in DPR Korea