You are here: Home / CABI Publications / Farmers in Rwanda reap benefits with advice from plant clinics

Farmers in Rwanda reap benefits with advice from plant clinics

Plant clinics have been operating in Rwanda since 2011 when 8 were launched in the four zones of the country by the Rwanda Agriculture Board (RAB) in partnership with Plantwise. The plant clinics are intended to help smallholder farmers to manage the sometimes devastating crop diseases and pests by acting as an easily accessible source of current, timely, practical, trustworthy and cost-effective advice. In addition, as a community-based early-warning mechanism for crop problems, they are expected to generate data that give an insight into the spread and occurrence of important crop health concerns.

Early notification of a devastating crop disease can save a whole harvest from destruction and can help the government to set up prevention and control measures. That was what happened with maize lethal necrosis when a plant health clinic in Byangabo in the north first recognized it in 2013. RAB and Plantwise undertook a study in 2015 involving 116 farmers, among whom 39 were regular plant clinic users, 37 were first-time users and 40 had never used the clinics, to learn how the clinics were playing their role. The study also sought to determine the nature of the interaction of the plant clinics with other services supporting farmers and the opportunities for enhancing the relationship. 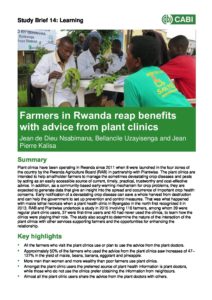 Farmers in Rwanda reap benefits with advice from plant clinics