This report, commissioned by the Department for International Development, indicates that the arrival of fall armyworm (FAW) in Africa has the potential to cause maize yield losses in a range from 8.3 to 20.6 million tonnes per annum, in the absence of any control methods, in just 12 maize-producing countries. This represents a range of 21%-53% of the annual averages production of maize over a three year period in these countries. The value of these losses is estimated between $2,481m – $6,187m.

Evidence indicates that FAW’s spread to the limits of its viable African habitat within the next few cropping seasons should be expected. This may include northern Africa and Madagascar. 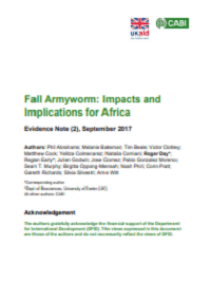