You are here: Home / CABI Publications / Direct2Farm proves the case for mobile-based agro-advisory services in India

Smallholder farmers in India are largely dependent on other farmers as their main source of agricultural information, with government extension services geographically limited and agricultural dealers not always trusted to provide impartial advice. Between January and July 2015, 400,000 farmers were registered to receive seasonal, crop/livestock-specific information on their mobile phones via CABI’s Direct2Farm (D2F) SMS and voice message service. The service was free and provided targeted, personalized messages based on users’ location, language and farming practices, including choice of crops and livestock.

Around 10 million voice messages and 5 million text messages were sent by the D2F service during 2015. Although a significant proportion of these failed to reach their intended targets, around 40% of the initial 400,000 registered farmers became active users of the service, regarding D2F as a valuable and credible source of agricultural information. Around 90% of active users reported sharing the information received with other farmers and recommending the service to them. Over 70% reported taking action on the basis of the information received, including having their soil tested, planning their activities on the basis of weather predictions and purchasing recommended agricultural products. 72% of farmers reported increased productivity and a reduction in crop losses as a result of acting on the information. 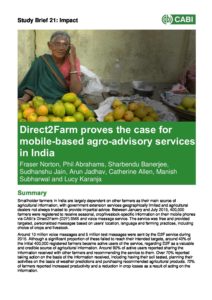