You are here: Home / CABI Publications / Delivering messages from plant clinics. The influence of communication on farmer’s perception and uptake of advice: Nepal

Delivering messages from plant clinics. The influence of communication on farmer’s perception and uptake of advice: Nepal

A study was carried out in Nepal in November 2016 in order to investigate the following questions: How do plant doctors and their client farmers communicate? How does this communication shape the farmers’ response to the advice? The study team visited four plant clinics (Gokarna, Hemja, Arye Bhanjyang, and Bhalwari), listened to consultations at the clinic, reviewed clinic records and visited 14 farmers who had taken queries to these plant clinics to hear about their experiences following the clinic visit.

The farmers usually bring good samples of sick plants. This non-verbal communication helps to show the phytosanitary problem to plant doctors. However, the plant doctors themselves seldom send samples of unfamiliar plant health problems to the laboratory.

Some of the plant doctors have fact sheets to distribute, including some in the Plantwise format and some that are not. Part of the non-Plantwise fact sheets are printed on inexpensive paper, and come on a pad, so the plant doctor can rip off one sheet at a time. This makes the written material easier to distribute to farmers, an idea that could be copied in Nepal and elsewhere. The plant doctors have illustrated guides to insect pests and diseases, which they do consult at the clinic. Pest management decision guides were not seen at the clinics, neither was the use of the Plantwise fact sheet app.

The plant doctors recommend cultural control and pesticides more or less equal measures. They also recommend pheromone traps, which can contribute to less use of pesticides. Some plant doctors regularly recommend removing the diseased leaves from plants, leaving the healthy tissue (an uncommon cultural control). Plant doctors often give farmers several recommendations, which farmers tend to regard as a menu, choosing some and not others. Some farmers, including those who have attended farmer field schools (FFS) are interested in alternatives to chemicals.

The plant doctors were generally conscientious about telling farmers the diagnosis and the dilution rate of pesticides, writing both on the prescription form. However, dilution rates are often expressed as grams per litre, which farmers often find difficult to understand. Sometimes plant doctors also tell the farmers the background information: why the technology works. At times parts of the prescription form are written in English (especially the diagnosis and the name of the pesticide). Farmers find English words hard to understand.
Of the 14 farmers visited, nine said that they had adopted all or some of the advice. They appear to choose creatively from the options the plant doctors give them, almost always finding something they can try on their own farms. However, there were times when the farmers could use more background information or a fact sheet or a clear statement of the dilution rate of a chemical product. Three farmers rejected all of the advice, and in two cases farmers adopted unhelpful advice.

This study revealed few clear cases where technical advice was rejected only because of failed communication. However there was one failure to properly identify an emerging pest (Tuta absoluta, the leaf miner), and a case where lentils were mis-diagnosed as having blight. In both cases the farmers adopted the advice without solving their problem. In another case, a farmer miscalculated the dilution rate for insecticide and killed her onions. But in general, the communication between farmers and plant doctors is clear, especially in speech. The plant doctors and the farmers can all speak Nepali, even if some are bilingual in minority languages as well. The plant doctors ask the farmers questions about the crop history, which helps to make a proper diagnosis. The plant doctors engage in a friendly and respectful communication with farmers.

The local communities are satisfied with the plant clinics, as are the individual farmers. Every clinic visited enjoys the support of either an agricultural cooperative or a FFS group that provides a place to meet, and local leaders who attend. Nepal is starting to experiment with using FFS farmer graduates as plant doctors. 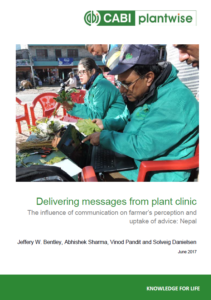 Delivering messages from plant clinics. The influence of communication on farmer’s perception and uptake of advice: Nepal