You are here: Home / CABI Publications / Delivering messages from plant clinics. The influence of communication on farmer’s perception and uptake of advice: Malawi

Delivering messages from plant clinics. The influence of communication on farmer’s perception and uptake of advice: Malawi

A study was carried out in Malawi in September 2016 in order to investigate the following questions: How do plant doctors and their client farmers communicate? How does this communication shape the farmers’ response to the advice? The study team visited three plant clinics (Ndaula, Kafukule and Mitundu), listened to consultations at the clinic, conducted exit interviews, reviewed clinic records and visited 12 farmers who had taken queries to these plant clinics to hear about their experiences following the clinic visit. Focus group discussions with farmers on plant health rallies were held at two sites: Ndaula and Msundwe.

The plant doctors have few written materials at their disposal, although they do derive much support from a field guide (Major Pests and Diseases of Important Crops in Malawi). The Plantwise Fact Sheet App was not seen in use. The study team did not observe plant doctors sending samples to the lab, but they actively seek peer counsel from each other, from experts within Malawi, and from CABI staff who are on the WhatsApp group.

Plant doctors often recommend several technologies at once, which is consistent with integrated pest management (IPM), although farmers often take this as a menu of options to choose from. Of the 12 farmers visited, 11 said that they had used all or some of the advice. They appear to choose creatively from the options the plant doctors give them, almost always finding something they can try on their own farms. Only one farmer reported to have rejected all the advice.

Most of the cultural controls that farmers tried are similar to what they already do (e.g. rotating and weeding their crops); the plant doctor’s advice may have reinforced an existing behaviour, which is often a valuable contribution to the farming system, but is not adoption per se. The farmers avoid some of the more tedious advice, like hand-picking insect pests. Chemical control seems to be farmers’ preferred option. In contrast, the plant doctors tend to over-recommend roguing.

Written records are not always complete, which is not surprising given that plant doctors may serve 20 farmers in two or three hours and therefore have limited time to fill the prescription form. It is likely that farmers are given verbal advice which did not enter the written record. Sometimes a farmer may forget a recommendation, or recall advice that was not on the prescription form, making it somewhat difficult to put a numerical value on how much of the technology was adopted.

The study revealed no clear cases where technical advice was rejected only because of failed communication. The communication between farmers and plant doctors is generally clear, especially in speech. E.g. the extension agents speak the local languages fluently. Yet, some plant doctors communicate better than others. Some tell farmers the diagnosis; others seem less inclined to do so. Some tell farmers the dilution rate, while others also write it on the prescription form. Few plant doctors tell the farmers the background reason: why the technology works. The farmers bring good samples of unhealthy plants, which help communication with the plant doctors who ask questions and in general engage in a friendly, business-like, horizontal communication with farmers. The plant doctors have made a useful innovation, writing the recommendations in the local language on the back of the prescription form (which is long and not very farmer-friendly). 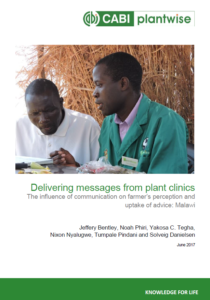 Delivering messages from plant clinics. The influence of communication on farmer’s perception and uptake of advice: Malawi