Invasive alien species (IAS) are non-indigenous species that adversely affect, economically, environmentally or ecologically habitats where they have been introduced, either accidentally or deliberately, outside their normal past or present distribution. IAS and climate change, with land use change and changes in the nitrogen and carbon cycles, are identified as the top four drivers of global biodiversity loss.

Their relative importance depends on the ecoregion being considered. Biodiversity loss is accelerating because of the globalization of trade and increased international tourism. Furthermore, both climate change and IAS can affect production landscapes, reducing crop yields and the provision of ecosystem services. While many articles have identified the drivers of biodiversity loss, they have not considered or modelled the interactions between drivers. For example, land use change creates an empty niche for invasions to occur so together these drivers have a greater impact than separately.

Climate change can facilitate IAS as:
• new species, that may become invasive, will be entering regions due to climate change,
• species hierarchies in ecosystems will change, leading to new dominants that may have invasive tendencies, and
• climate induced stress in an ecosystem will facilitate invasive pathways.

Alternatively, IAS can facilitate climatic stress by increasing ecosystem susceptibility to climatic perturbation, through reducing the number of species and their functional types within the ecosystem. 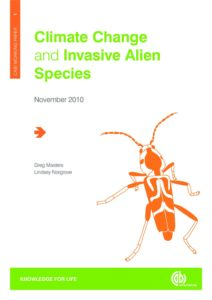