This report presents the findings of a qualitative study on the effect of Plantwise on the plant health system (PHS) in Ethiopia. In August 2017, stakeholders and farmers in the regions of Oromia and Tigray were interviewed on the major changes that occurred in the PHS in recent years. These stakeholders had been involved in, or benefited from, Plantwise activities. The qualitative data was used to explore changes observed in the different functions of the plant health system (PHS) since the start of the Plantwise programme in Ethiopia in 2013, and the underlying drivers of change. The PHS functions are defined as: 1. Farmer advisory services; 2. Plant health information management; 3. Diagnostic services; 4. Research and technology development; 5. Input supply; and 6. Policy, regulation and control. The effects of the changes on the PHS performance and responsiveness were assessed through the following indicators: timeliness, availability, affordability, acceptability, coherence and reach.

Although the Federal Government of Ethiopia gives high priority to agricultural development, plant health has been neglected since the mid-1990s. In recent years, increasing pressure of crop pests and diseases has resulted in a growing awareness of the need to reinvigorate the PHS in Ethiopia. Plantwise was introduced in 2013, at an opportune time when the Federal Government was looking to improve the capacity of the Ministry of Agriculture and Natural Resources (MoANR) in plant health.

All stakeholders reported improvements in the performance and responsiveness of the PHS, in particular farmer advisory services and diagnostic services, as a result of the Plantwise intervention. In Ethiopia, Plantwise has particularly focused on strengthening farmer advisory services in plant health and crop protection. This has included capacity building of 270 extension officers (now plant doctors) through training on plant health; and the launch of community-based plant clinics (now 40 Plantwise initiated clinics1) in the Amhara, Oromia and Tigray regions. The community-based plant clinics have been established in so-called hot-spot areas: kebeles with intensive and irrigated farming that face many plant health problems. The trainings were also attended by woreda (district), zonal and regional crop protection experts, and have resulted in more effective diagnostic and advisory services on plant health (improved acceptability and coherence). The community-based plant clinics further improved the reach and availability of plant health advice in local communities. The speed (timeliness) of diagnosis and advice has also improved due to a combination of improved knowledge as well as faster communication tools (e.g. mobile phones, internet). Farmers confirmed these improvements at kebele level, and reported that productivity had increased as a result. However, they reported that changes created through other interventions (improved agronomic practices, collective marketing, etc.) also contributed to productivity increases. 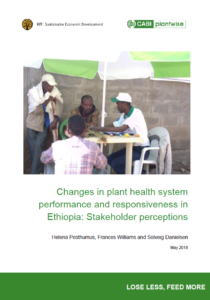