You are here: Home / CABI Publications / Assessment of the use and benefits of the Plantwise Knowledge Bank

Assessment of the use and benefits of the Plantwise Knowledge Bank

This study assesses the use and benefits of the Plantwise Knowledge Bank (PWKB) using mixed methods. Focusing on website activity for 2021, study findings show that the PWKB has diverse users within national plant health ecosystems from both Plantwise and non-Plantwise countries. Plantwise countries are countries who have implemented elements of CABI’s Plantwise programme. Most users in 2021 were from Plantwise countries in Asia, with users from other regions also contributing significantly to the site traffic. Furthermore, there was an increase in number of users, visits and page views as compared to past years, with the site having more men than women, visitors. Most users were repeat visitors who found the site organically via mobile phones. The site had very few referrals via social sites or paid searches, but there were fairly consistent referrals from Wikipedia. 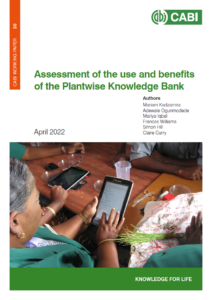 Assessment of the use and benefits of the Plantwise Knowledge Bank